The famous broad breasted bronze turkey originated in the flocks of J.H. Richardson of Saltcoats, Sask. He opened the first exclusive turkey hatchery in Saskatchewan in the late 1940’s. He selected the best from small flocks across Canada, breeding them until he developed the desired bird. He also experimented with different feed mixtures that he mixed himself.

The original hatchery was built in Saltcoats on the lot east of the Anglican church. The chicks were hatched in large incubators in the house and then later in the hatchery (both on the same lot). The hatchery was later moved to a fenced and sheltered area outside of town limits. This breeding stock became the basis for several large poultry productions across the province. The Willis turkey farm was one of these as well as George Ridley of Leslie ( the younger brother of Maree Willis). The candled eggs were the basis for new flocks and were sent in large wooden crates all across Saskatchewan and other provinces. Some were even sent to Cuba.

John Richardson hired local men to care for the flock and women to work in the hatchery. Maree Willis worked there for 3 years and her sister, Joyce, worked from the start to the end of production, a total of 18 years. The work was very physical with a lot of carrying feed and hauling water which came from the lake. John entered his birds in local and provincial fairs winning many prizes there as well as the Royal Winter Fair.

These birds were free range, hardy and could fly a great distance. They were quiet and friendly birds. The hens weighed 14 to 16 pounds and the toms up to 30 pounds. In the fall flocks were government banded and blood tested keeping the best for breeding stock. The rest were sold for meat. The local birds to a killing plant in Yorkton. The turkeys were sold under the label – Granny’s Turkeys.

[On the Willis farm] Breeding stock was wintered in large buildings but the hens laid eggs in nests built outside. The eggs had to be collected often so they did not freeze. These were candled, cleaned and sent to the nearest hatchery.

The aggressiveness of the male birds led to the use of canvas saddles being placed on the backs of the females. Eggs were sent in large wooden crates (later cardboard) to the hatchery. After breeding season was over the whole flock was sold for meat to make room for the next seasons flock.

John Richardson had retired to Medicine Hat several years prior to the Saltcoats History Book being published and as there were no living relative in the vicinity no mention of them or this history is in the book. Another person who worked in the turkey industry in the area was Casper Haas. He would go around in the fall doing the banding and blood testing for the government.

Article on John Richardson
Published in the Canadian Champion, April 17, 1958 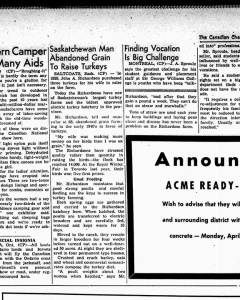